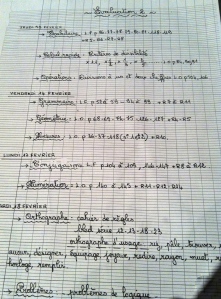 Elementary school testing in France is a lot more intense than anything I’ve seen in the US. I used to teach in a very competitive high school in St. Louis, and what elementary age children have to prepare for here in France is quite similar to exam prep for quarter, semester, and final exams.

Here is a photo of part of my son’s list of what to study for the upcoming “exam week”. He just turned ten, by the way. These aren’t national exams, they’re just the regular exams that children in France always have a week before the next vacation begins. That means they have intense exams about once every two months. In our region, the next school holidays will begin on February 28 and will last until March 17. There is a light at the end of the tunnel, but for now, every spare moment is spent getting ready for testing.

I’ve noticed that the stress involved in preparing for such an event is not downplayed by either parents or teachers. It’s as if rigorous testing were a right of passage into the harrowing realm of higher education in France.

There are ups and downs to every school system, and what I say next may surprise you. I like it. I like the testing. I don’t necessarily like the stress involved, and I don’t think it’s good for the whole class to know who is first in the ranking and who is last. But I do like the testing. I like that the kids are held accountable for remembering what they learned two months ago, and I like that they have to learn to study. However, it must be torture for students who struggle in school. That’s the part that sucks.

Children who test poorly, but who are otherwise quite intelligent and creative, visibly have a hard time finding their place in this system. The French school system is not set up to encourage creativity. If you can focus well enough to pay attention in class at least 80% of the time, not talk out of turn, and memorize your lessons, chances are you have a shot at success.  Just forget about ADD / ADHD.

We will aim to keep the creativity alive, all the while raising the bar high for success. I feel very fortunate that language isn’t a barrier for our children. I can only imagine how difficult it must be for expat children who attend French school. And what about parents who are still working hard to learn to speak French? It must be quite frightening when the study guide makes it’s way home less than a week before exams begin.

In case you cannot see everything on the study guide, here’s the list:

So what do you think? Let me know if you are curious and have any questions about this study guide. This is the kind of thing I would have loved to show to my students back in St. Louis, just to give an idea of how different things are in France.

Even though it’s tough, I have to say that we are very fortunate that the school we chose is a very good one, and the kids love their “maîtresse”. We’ve had nothing but pleasant experiences concerning school so far. Everyone at the school has been nothing less than helpful from the very start. I feel that they’ll be well prepared for what’s to come. Just for the record, in CP (first grade) they also have a week of testing coming up, but there is no studying involved. I think the only thing she’ll have to study will be the last four poems they’ve memorized.

Unauthorized use and/or duplication of this material without express and written permission from this blog’s author and/or owner is strictly prohibited. Excerpts and links may be used, provided that full and clear credit is given to Jennifer Crespin and Living in Languedoc with appropriate and specific direction to the original content.
%d bloggers like this: