I began this post to write about what it was like to be invited over by a very French couple today, and to share a glass of champagne and the tradition of the galette des rois.  As I was writing, my thoughts began to morph into a sort of reflection on this time of year and the tradition of the King Cake, both in France and in Louisiana (Home Sweet Home).  Now it is my goal to tell you about my lovely day while musing upon “the reason for the season”…and another excuse to eat cake and drink champagne.

After a solid month of festivities to celebrate Christmas Eve, Christmas, New Year’s   Eve, New Year’s Day, my son’s and daughter’s birthdays, by this time we’re usually getting ready to wind it down.  But here we are in France, and January 2 means it’s the first day that many pâtisseries begin selling the celebrated “Galette des Rois”, known to Louisiana folks like me as “King Cake”.  If you’re not from an area where Mardi Gras is revered, you may not be familiar with the tradition of the King Cake. Even if you are from an area where Mardi Gras is celebrated, and especially if you aren’t Catholic, you may have never heard about what it truly represents.

The tradition of the King Cake in Louisiana comes directly from the French, and even if our cakes don’t exactly look alike, the brioche-type one from the South of France does resemble it quite a bit, so it seems the American grand-daughter has inherited some of the good genes.   Though the bread part of the two varieties does taste more or less the same, the Louisiana one is typically flavored with cinnamon (like a coffee cake), topped with a sugar glaze and granulated sugar tinted in the official colors of Mardi Gras in New Orleans, which are purple, green, and gold (see the first picture below).   The French brioche omits the sugar glaze and tricolor sugar, replacing it with a variety of candied fruits (second picture). Both versions are shaped in the form of a circle, representing the form of a crown.   The third variety you see in the pictures below, and perhaps the most common in most parts of France, is the Parisian style Galette des Rois.  It’s made of puff pastry and frangipane, and it’s exquisite.  All three cakes are irresistible, and all contain a hidden “fève”, which for us in Louisiana would be a plastic Baby Jesus, but here (at least in my limited experience) they’re mostly ceramic figurines from the nativity scene (la crèche).  The one lucky guest who finds the fève is the king or queen for the day!  Many people in France find it amusing to collect these tiny trinkets from year to year, and I know that it’s something I’ll be doing from now on. 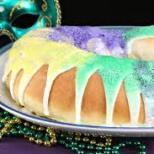 Today we were invited to the home of the owners of our  building (which houses only three apartments).  They live just beneath us, and they’re a lovely, fabulously Bourgeois retired couple.  They had us over to “tirer les rois”, which basically means to share a galette des Rois with them, and to see who finds the fève.  The first thing they did was show us the handmade “crèche” which takes the space of about half a room.  The wife is an artist, and she spent over ten years creating this magnificent work of French & Catholic culture.  The crèche is a French tradition, and it includes hand-crafted, hand-painted figurines from Provence.  These figurines are called santons , which means “little saints”.  Besides Mary, Joseph, Baby Jesus, and all of the stable animals who were there on that Holy Night, characters from “la vie Provençale” are also present, and these are the santons.  They represent 16th century Provençal characters and trades.  These characters are portrayed as bringing offerings to the Christ Child.  .  There are shepherds, fishermen, women with water jars, woodcutters, gardeners, millers, bakers, basket makers, hunters, blacksmiths, blind people, Bohemiens, chimney sweeps, snail sellers, and even village idiots!  The list goes on and on, and if you’re ever trying to think of something very typically French to bring back home after a vacation in France, you’ve found your answer. 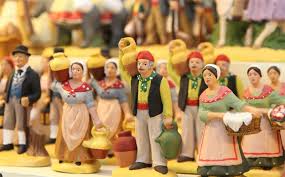 Just as a side note, the santons you see to the left are not the ones we saw today.  I didn’t think about asking to take a picture of her creation, though I should have.  I’m sure she would have been very happy to oblige, and perhaps I’ll go and ask before January 6 if I can get a snapshot.  She’s gone as far as to build a village church complete with a clock and a rooster on top of that, a bakery with bread so fresh you can almost smell it, a wine cellar in which you’d love a dégustation, groups of Provençal men playing boules, plus almost any other kind of shop you could imagine from a sixteenth-century Provençal setting.  She’s an amazing artist, and their apartment is stunning, especially since it is she who created all of the paintings throughout their home.

Our hosts today served us both varieties of the French King Cake, and they served them with champagne and chilled crème anglaise  (that’s how it’s done in France).  A friend from Wales recently told me that this custard should be served warm, but I trust the French to know how to do it better 😉  And by the way, I was the queen of the day, though I tried to pass off the fève unseen to both my son and daughter so that they could enjoy the honor.  However,  they insisted I wear the crown (Oh, joy!).

The King Cake represents the arrival of the Wise Men (the Magi, les Rois mages, The Three Kings) at the birthplace of the Christ Child in Bethlehem on Epiphany, or January 6, and the Eve of Epiphany represents the “Twelfth Night of Christmas”, with the first “Day of Christmas” being on December 25.  If you’ve never thought about what Epiphany or the Twelve Days of Christmas are actually about, you can read more about it here.  Even better, treat yourself to a performance (or at least a DVD performance) of Shakespeare’s Twelfth Night, you’ll be glad you did, what fun!  My daughter told me today that it’s still Christmas, and that today is only the 9th Day.  Where are the Ladies Dancing?  I’m still waiting for them to show up.  Representing the fruits of the Holy Spirit, I’m sure they’ll be here when least expected.

I hope this little post will serve as a reminder that it’s not over till it’s over.  Here in France, once Epiphany has come and gone the galette des Rois  shall also disappear, but keep in mind that in my hometown in Louisiana, you can eat King Cake all the way up until midnight on Mardi Gras.  Then the 40 days of fasting will bring us all back to some semblance of sobriety until Easter arrives.  Then it all starts up again.  Bonnes fêtes, tout le monde!

4 thoughts on “It may be January 2, but the celebrations never end in France (sounds like Louisiana)”