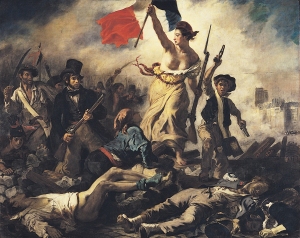 The next morning, day 3, we allowed ourselves to sleep in a bit.  We didn’t really get our day started until about 10:00.  Everybody was happily rested, and that’s always a good way to start the day.  At this point, all of the guys were simply delighted at the idea of eating croissants, pain au chocolat, and baguettes  every morning for breakfast.  By the end of the trip, and I will never understand how this could be, they were really tired of the “continental” breakfast.

We had a big day in store.  We had many things to see in Paris before moving on to the South of France.  On this day, we went out to Versailles.  Many times, I try to get away with not going out there because it’s just way too crowded., but this time the guys really wanted to go.  Our coach driver was nice enough to bring us out there, even though it wasn’t an official part of our tour.  Rather than being dropped off right at the entrance of the Palais de Versailles http://www.chateauversailles.fr/homepage like most of the other tourists, we came upon it from the edge of the gardens.  This allowed us to approach the palace by meandering through the oak lined paths.  We saw Marie-Antoinette’s Petit Trianon http://en.chateauversailles.fr/marie-antoinettes-estate and Le Petit Hameau http://www.pbs.org/marieantoinette/life/hameau.html before seeing the Palais.

Students can enter the palace for free as long as they’re under age 18, and so most everybody did go in.  After visiting, they couldn’t stop talking about the sheer opulence of the place.  I guess the crowds don’t bother them as much as they bother me.  It also helps that they’d just studied about the French Revolution http://chnm.gmu.edu/revolution/ in history class.

After our trip to the palace, we went into town to the Place du Marché http://millie.furman.edu/versailles/towninfo.htm where there are many small, not terribly expensive restaurants.  Once again, we split up for lunch.  I will recommend going to this part of town for dining.  It’s not really the place where you’ll see hundreds of tourists.  This isn’t because it’s located very far from the palace, but it’s rather  because you have to walk past a lot of other restaurants before arriving there.  Most tourists, I imagine, are tempted by the first places they see.  Some of my students did disappoint me by eating at a Tex-Mex restaurant, but I didn’t tease them for too long.  Apparently they paid a lot of money for a very average, even bad lunch.  Lesson learned!

When we got back to Paris, it was already late afternoon.  It seemed like everyone wanted to get back to the Quartier Latin, imagine that.  We went there for a few hours of free time before heading up to Pigalle  for dinner.  Why would I bring 20 American teenage boys to Pigalle http://en.wikipedia.org/wiki/Quartier_Pigalle for dinner?  For one thing, it’s cheaper than other areas.  For another thing, they get to see a seedier part of Paris, and between you and me, they like that!  It was all innocent enough, and the food was good.

Next in the “Paris, Je t’aime” series (Part 5), join us on a trip to the highest point in Paris:  Montmartre.