A little about me…  I’m from Louisiana, which may somehow explain my obsession with all things French.  Not living there anymore, moved away when I was 23 to see what it was like “away from the south”.  If anything, I’ve come to have a much greater appreciation for most things southern than I ever had when I was living there.  I’m living in the big middle of the midwest in the great city of St. Louis.  Some will say that St. Louis is a small town, but if you come from a place somewhere in Louisiana that isn’t even considered a town and doesn’t have a post office… St. Louis is pretty damn big.  Ok Louisiana people, especially those who know me.  YOU may be from a town, but I’m from a community.  A community that has only a gas station (with some darn good boudin, if I may say so myself) and a golf course.

Been living here in ole St. Louieeee  off and on since ’96.  In the meantime I’ve managed to earn a Master’s degree in French, get married to a very sexy Parisian, procreate a mini-me troop of three, live in Béziers, France (mediterranean coast, west of Montpellier), come back to St. Louis to be a high school French teacher, and the list does go on…  More about all of that later. 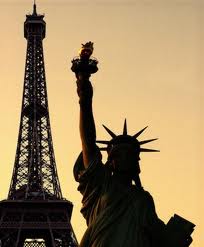 I decided to get started on this blog when I realized that this American-French lifestyle I live certainly isn’t unique to me.  When you fall in love with someone from another country, there’s way more to it than what you can see when you say “I do”, or just “Oui” as I did at our wedding in France.  There are the first days, before the days of real jobs and children when you seem to focus entirely on perfecting, as in my case, the French language.  Then there are the little cultural differences that make life very interesting.  And then….  drum roll…. And then you have the kids.  What a pleasure, yes I’ll agree there’s nothing quite like being a parent.  This is, after a certain number of years of marriage, the time when you’re really going to make it or break it.  Of course I know that’s true for all married couples, probably with or without children, but boy let me tell you something.  Raising the kids the international way, growing up in America with a very French lifestyle, speaking only in French at home with the kids….  Now in my mind, this is the stuff good blogging is made of!  So if anyone actually clicks on this link, even by accident, I hope you’ll enjoy.

3 thoughts on “Allow me to introduce myself to the world of blogging.”